A Historical Brief of the Anthora 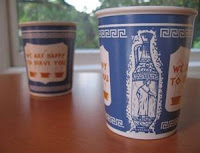 In 1952 Leo Hulseman, a Swedish immigrant and avid tea drinker, worked on an assembly line at Munter’s Chemical Physics Lab, at that time a leading producer of dye in New York City. Hulseman’s duties, among other strenuous tasks, was to empty the dyeing vats each morning, where large quantities of a bi-product called polystyrene would build up. Bleached and discarded into large drums, Hulseman noticed that once cleaned with lye, the resulting chemicals and acids created a foamy, buoyant white material. Savvy and full of ideas, Hulseman made a list of all the chemicals involved in the dying and cleaning process, save the coloring, and brought it to his coworker, fellow Swede Carl Georg. Over the next few years, Georg perfected his formula, noting that this new material could not only be shaped and molded, but that it insulated heat. Hulseman and Georg worked nights molding their foam over coffee cups, and selling them to street vendors on the way to work as a cheap alternative to the paper cup. In 1955, Leslie Buck of the Sherri Cup Co approached Georg and Hulseman to buy their formula as an insulator to their coffee cup. Partnered and geared for success, Buck launched the new, cheap insulated paper coffee cup, selling primarily to Greek and Chinese restaurants on the Lower East Side district of New York City. The blue and white, insulated cup was named the Anthora, derived from the Greek Word amphora, meaning a handle-less vase. The Anthora has become a staple amongst NYC street vendors and marketers, and has seen several changes in the course of its fifty some years of existence, most notably the words, “We are Happy to Serve You” written across the cup.
Posted by JPG at 12:56 PM